One of the greatest (and possibly most irritating) pleasures of being a scientist is the plethora of movies that take something minutely theoretically possible, throw it in a pot with pseudo-science, and create a colossal disaster the likes of which the Earth has never seen.  Very rarely does any real science make it into these “science-fiction” movies, but that is what makes them both fun and entertaining: the utter lack of reality or science.

Over the past two weeks, we have been gathering votes from our fans on social media naming their favorite geological disaster movies of all time.  We have compiled the leading vote getters, so get ready to have your minds blown:  Drumroll please….. 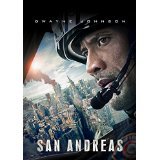 Premise:  Cal-Tech University seismologists have created a predictive modeling software program for earthquakes that has 100% accuracy.  This program predicts that the notorious San Andreas fault, a right-lateral strike-slip fault system on the transform plate boundary of the North American and Pacific plates, is going to rupture with a 9.6-magnitude earthquake.

An S+R helicopter pilot, played by Dwayne “The Rock” Johnson, needs to go through literally hell and high water with his estranged wife to rescue their daughter in San Francisco.

Destruction:  The quake rips through Los Angeles and San Francisco, liquefying buildings, opening chasms in the ground, and as the coup de gras, creating a 100m high tsunami that completely inundates the Bay Area.  Literally tens of millions of people are killed, trillions of dollars in destruction is created, and (spoiler alert), there is a happy ending. 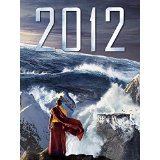 Premise:  Geologists and Astronomers have discovered that the Mayan Calendar was, in fact, correct in its prediction of the “end of time”.  The day: 12/21/12.  Scientists realize that the Earth’s tectonic plates will “detach” themselves from the mantle and begin to spin wildly, ravaging the human race.  They, along with various world leaders, put into motion a plan (large “arks”) that will spare the world’s best and brightest to begin society anew.

A failed writer, played by John Cusack, must get to one of these “arks” with his estranged wife (cough, cliché, cough), her new husband, and his two children along with a motley cast of characters including a Russian billionaire and his arm candy.

Destruction:  The casualty meter in this movie along with the destruction is beyond cataclysmic.  Ostensibly, billions of people are wiped out in a chain of disasters including earthquakes, the eruption of the Yellowstone Super Volcano, and worldwide tsunamis that crest the Himalayas (where scientists have pinpointed the exact time the waves will hit the “arks”).  Essentially, the entirety of the human race and the world they inhabit are completely destroyed, so the scope of this movie is large to say the least.  The running time is also cataclysmic, coming in at just over 3.5 hours (good god) 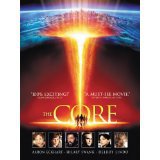 Premise:  A university Geophysicist theorizes that the Earth’s molten core is cooling and dying given that the Earth’s magnetic field seems to be weakening (cell phones dying, birds flying north, etc.).  So, a plan is hatched to bore to the center of the Earth with a machine built of a newly synthesized, indestructible element called “Unobtanium”.  Armed with a laser that vaporizes rock, they tunnel to the core to set off a nuclear bomb to “restart” the core and save the planet.

Aaron Sorkin and Stanley Tucci play high-fallutin’ geophysicists (Tucci is signing autographs in one scene, and acts like a jerk through most of the movie), Hilary Swank plays an astronaut charged with commandeering the ship, and Delroy Lindo plays a long-discredited geochemist and rival of Tucci’s character.  Together, the fearsome foursome must restart the Earth’s core and spare humanity from meteor showers, solar storms, and broken cell phones (In all reality, if the core died and the Earth’s magnetic field failed, life would not be possible on the planet).

Destruction:  Not as much as one might think in this one.  A few birds fall out of the sky, and cell phones hit the fritz, but the mass casualties and cinematic manner of destroying the Earth and everything on it are relatively non-existent.  Most of the action is centered around the journey to the core, whereupon the ship encounters quite a few troubles including a layer of diamonds (LOL).

Geology Sin Meter:  Off the charts.  All joking aside, this is perhaps the most ridiculous movie ever made, “scientific” or otherwise. 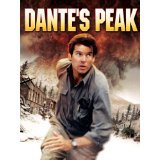 Premise:  An active volcano, similar to Mt. St. Helen’s, threatens to erupt and bury a small, idyllic Washington Cascades town.  Enter Pierce Brosnan as a volcanologist, his team, and Linda Hamilton, mayor of the town during its busy summer tourist season.  She predictably balks when Brosnan advises her to evacuate the town, and so ensues the battle between geology and humanity.

Destruction:  Quite realistic eruption of a volcano and the fallout from it.  Pyroclastic flows, lahars, ash clouds, volcanic bombs, preceding earthquakes, acid lakes, human-boiling hot springs, and the burying of a quaint little town.  Not as many implied deaths as some others like 2012 or San Andreas, but that’s probably for the best.  In a heroic turn of events, a grandma jumps into an acid lake and sacrifices herself for the group.

Geology Sin Meter:  Volcanoriffic  This movie is, for all intents and purposes, is quite geologically accurate.  The eruption is measured and the team of volcanologists are closely monitoring signs of an impending eruption, while making no claims that they can actually predict it with any accuracy.  Aside from a few ridiculous things such as outrunning a pyroclastic flow in a jeep, or driving that same jeep over extruding lava, this movie does itself scientifically proud.

And the #1 Best Bad Geology Movie of All-Time:  Tremors 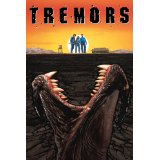 Premise:  In the Perfection Valley of Nevada, way out in the badlands of the Mojave Desert, something is not quite right.  When townsfolk start disappearing, a couple of local ranch hands (Kevin Bacon and Fred Ward) start trying to figure out what is happening.  During their wild goose chase, they happen upon a student (Finn Carter) doing her PhD thesis on seismology in the area.

What they discover is nothing less than prehistoric underground monsters that hunt with sonar.  Throw in Burt Gummer and Reba McIntyre as well-armed doomsday peppers, and you have yourself maybe the single greatest movie ever made.

Destruction:  Houses get knocked down, a Volkswagon disappears beneath the Earth (and is found later by country music emanating from the ground), and Perfection Valley residents are terrorized by the large, slug-like monsters that shoot snakes from their mouths.  Awesome!

Geology Sin Meter:  Graboid-tastic  The science in this movie is actually pretty solid, a surprise for such a goofy movie.  The seismic sensors that Rhonda (Finn Carter) has set up can accurately detect the beast’s approach, as any kind of Earth or soil disturbance creates seismic waves.  There is even a coherent discussion about the fossil record, and accurate conversation about the geologic time scale.  Boom!

This is one of my personal favorite movies, as it is tongue-in-cheek funny with great performances by all the actors.  It is fun, goofy, and foolish enough to be a good time for everyone.  To boot, it stays true to not just the theoretical, but actual science (monsters notwithstanding).

So there it is people, your Top 5.  Watch them over and over, they only get better with time, just like all things in geology.  Read The Goat’s blog in the coming days for more deduction of the actual science in these movies, as well as discussions about scientific consultants that have worked on, or refused to work on many of these movies.  So grab a bag of popcorn and a beer, grab a rock, and have good time!  Cheers!

Hiking and exploring our National Parks, or any of our public lands, is a special experience.  Although it is possible to see these places yourself, hiring a guiding outfitter is a great idea.  For instance, guiding services provide logistical support, and plan everything for your best possible trip.  They provide a great safety net on the trail, and are trained in backcountry medicine. Above all, they provide a depth of knowledge of the region that turns a walk into a true adventure.

Canyons and Chefs provides all of the support you need, and pairs that with professional chefs and expert geologist/guides.  Our meals use fresh ingredients and are inspired by local farms, culture, and cuisine. We utilize a mobile professional kitchen as a backbone for cooking over the fire.  Furthermore, we provide top-of-the-line gear and passion for the places we explore. In conclusion, you can these wild places, but going with a guide can create an even more memorable experience.  Don’t be shy, and call us!